Smart cities, buildings, and other smart strategies significantly rely on presence of humans and their quantity. This kind of human sensing is named occupancy detection. Occupancy detection requires body-mounted sensors, terminals (Wi-Fi, Bluetooth) in the pocket or ambient sensors (environmental) in a smart environment with sophisticated AI and ML algorithms to analyze the measurement results. Below, you can find descriptions of various ambient solutions that can be embedded into the environment.

Most building entrances and infrastructure objects have video cameras, these devices and others help foster occupancy detection. As an example, Analog Devices has developed Blackfin®, a low-cost and low-power embedded computer vision platform that has a smart motion sensing functionality. 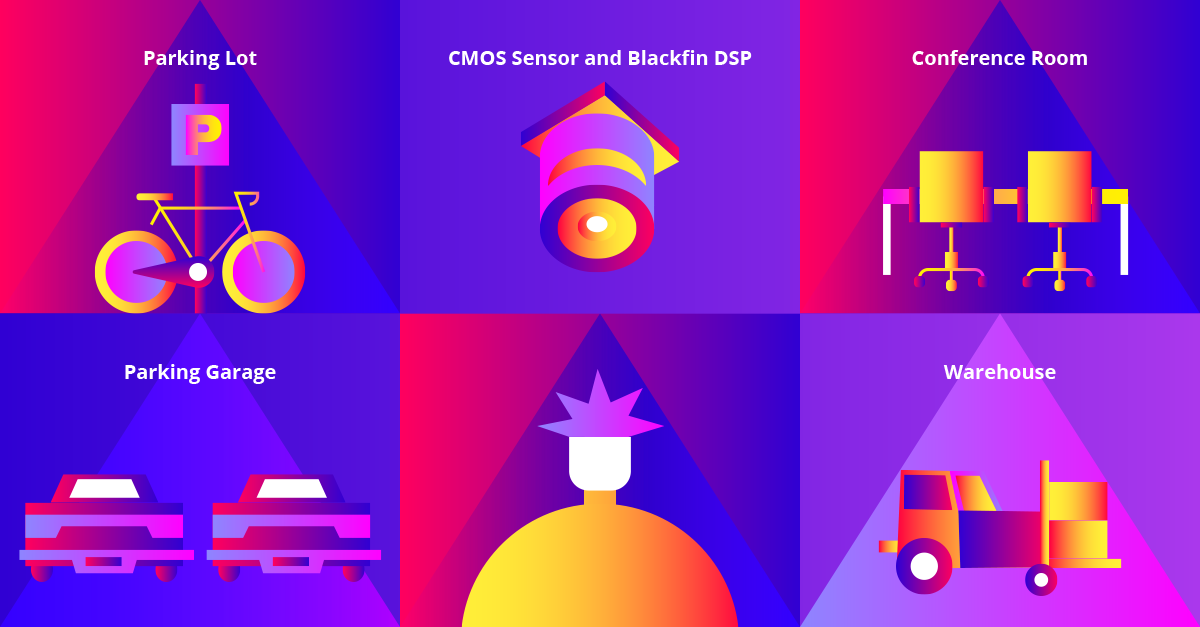 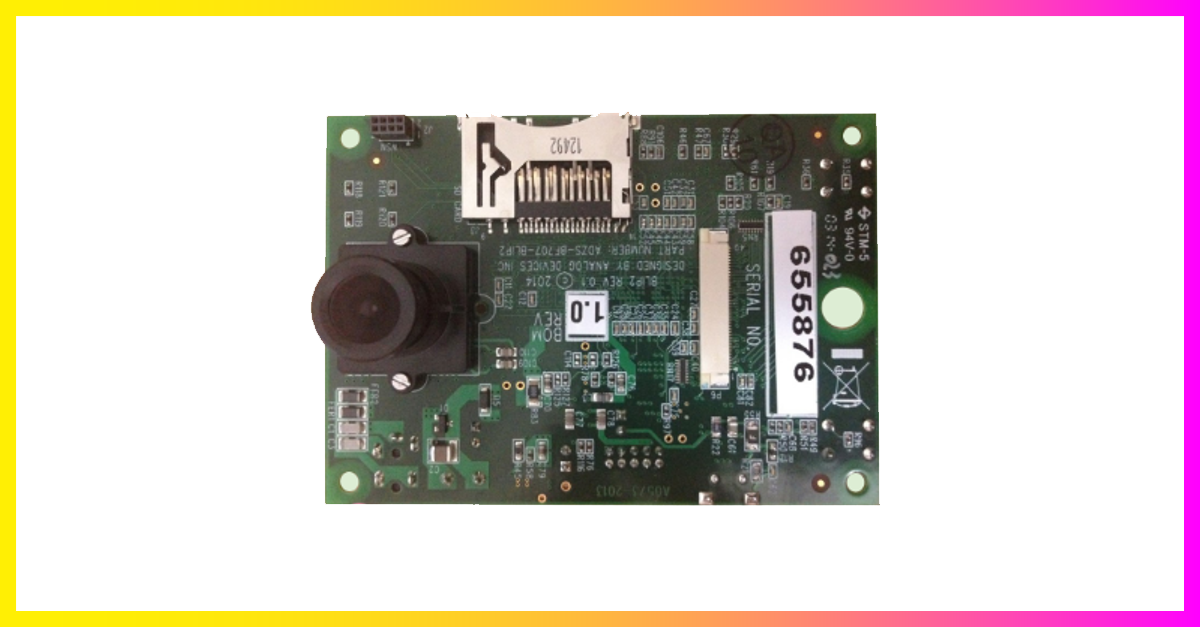 Using IR cameras instead of RGB allows fixing certain privacy issues. It is hard to identify people on the IR video stream to use for compromising materials—even if a video is stolen. Sensor construction and recommendations of placement are described here.

These sensors are commonly used for occupancy detection in alarms and light control systems. They are sensitive only to changes in infrared radiation (human motion, for example).

Placing several infrared sensors allows us to capture a temperature pattern and detect changes depending on how many people are in the room and their activity. In this work, authors placed infrared sensors at the doorways for counting the number of people inside rooms.

Ultrasonic sensors use simple radar idea—ultrasonic transmitter generates ultrasonic chirps that are reflected from human bodies. The microphone receives a reflected signal, and, after signal analysis, people are detected and counted. Schematic system design is shown in the picture below, taken from this work that describes the implementation of this system. 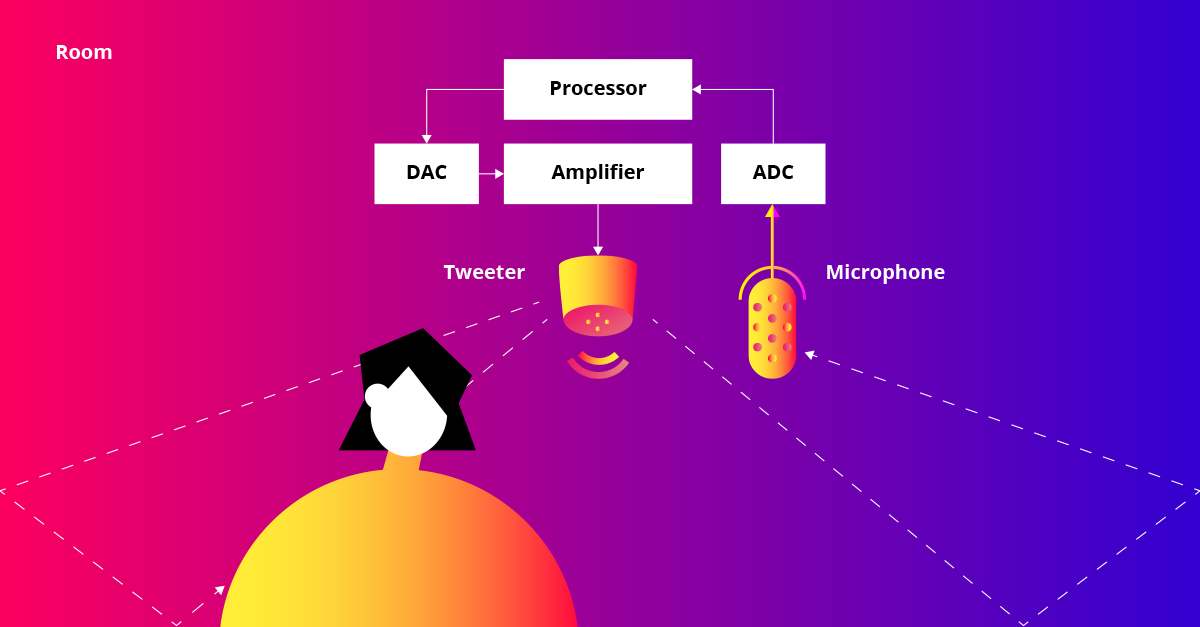 Technically, Wi-Fi sensing is the implementation of UWB radar technology. The main advantage is that Wi-Fi infrastructure is already present in modern buildings and is used for occupancy detection.

Additionally, Wi-Fi sensing can be utilized in both terminal and non-terminal ways. The radio frequency (RF) signal transmitted by a user's Wi-Fi terminal (smart devices) is analyzed in the first case.

The second implementation does not rely on user terminals but does require the presence of at least two Wi-Fi devices (e.g. a notebook and a Wi-Fi router). One device is used as a signal transmitter, the second – as a receiver.

Early Wi-Fi sensing implementations were based on the received signal strength indicator (RSSI) measurements, whereas more recent iteration use channel state information (CSI) that allows the simultaneous usage of AoA and ToF methods on several signal frequencies. Authors of this work claim that Wi-Fi is already successfully used for detection, recognition, and estimation tasks.

A microphone captures the noise produced by people in the room. After signal analysis, it is possible to estimate their exact number. Placing an array of directed microphones also allows tracking the position of a noise source. Speech recognition, speech segregation, and noise detection/classification techniques are useful for solving such a task.

Project Ubicoustics is an amazing example of microphone usage. You can learn project details here or watch the video.

Modern painting materials can convert a wall or even an entire room into a capacitance sensor or electromagnetic noise detector that allows detecting people near walls.

Project Wall++ is the best demonstration of possibilities and capacitance of sensors. Find more information here or watch the video.

A person releases a certain amount of carbon dioxide while breathing which can be used for occupancy detection. This approach was analyzed in this work, and it was noticed that CO2 data had to undergo processing to find the most meaningful way to gain valuable information.

In this work, it was shown that it takes some time or CO2 sensors to predict the exact number of people in the room, and more sophisticated algorithms (controllers) give better estimation results. The figure below taken from this work demonstrates the measured CO2 concentration in times when a different number of people are present in the room and the ventilation flow rate was set to 3 air changes per hour (ACH). 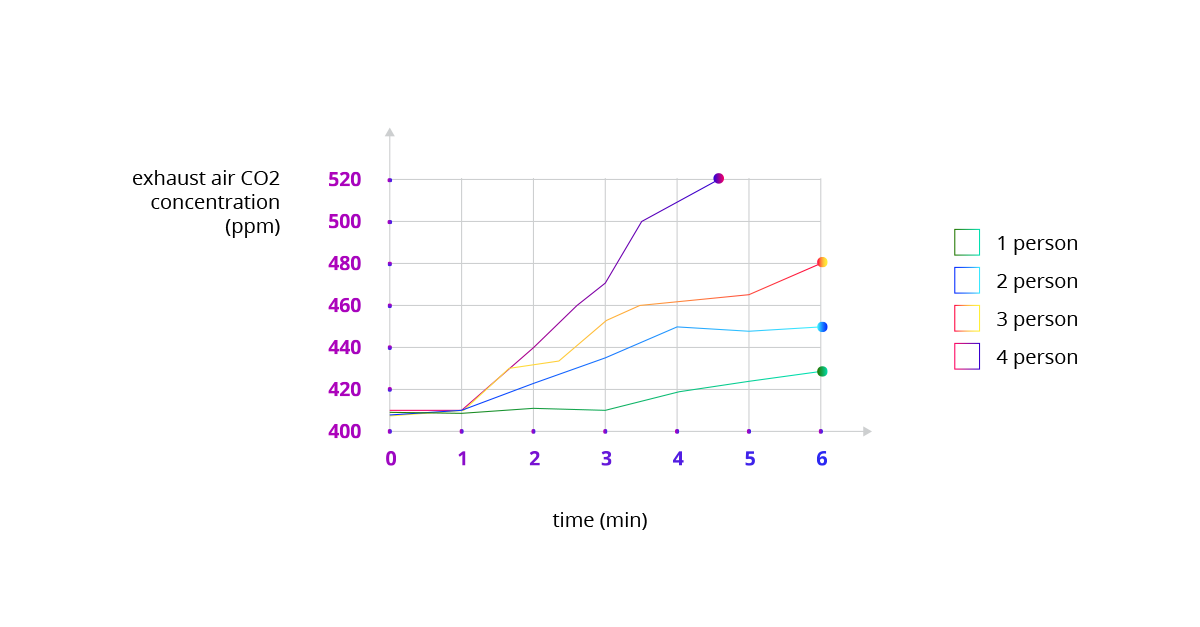 A home's pattern of electricity usage generally changes when occupants are present due to their interaction with electrical loads. An example of such an approach is described here.

Covering the floor with pressure sensors is also a viable solution for occupancy detection. It is enough to have several sensors near the door for tracking peoples’ location across an entire room. The usage of sensor pairs allows detecting movement direction—even paired with break-beam sensors. Descriptions of proposed solutions were found only in works about person identification by tracking walking style.

Overall, there are many approaches available for occupancy detection/people counting. Each of has its advantages and drawbacks—some are useful in certain cases, while quite ineffective in others. An attribute-driven approach can be the most helpful when choosing the most suitable solution. The best way to find the most valuable solution is to weigh in all pros and cons, efforts, and resources needed for its implementation and the needed outcome.

SoftServe’s R&D team keeps one finger on the pulse of technology to accelerate and foresee where breakthrough opportunities exist to solve particular business needs. Let’s talk about where you are in your digital journey.