Our client is a leader in property and casualty insurance, group benefits and mutual funds. With more than 200 years of expertise, the company is widely recognized for its service excellence, sustainability practices, trust and integrity.

Our client's existing analytics processes were based on an on-prem Teradata Hadoop Appliance that had an expiring support contract. The struggle with free space at the data storage infrastructure was putting business processes associated with Hadoop at risk.

The environment then was at >80% capacity with no room to scale, and our client needed to quickly move its multi-user analytics infrastructure out from on-prem Hadoop and build an AWS cloud-native analytics data platform. The business goal was to decommission the platform and migrate 400 TB of data along with analytical processes to the cloud, while minimizing costs associated with data storage and third party support, and enabling unlimited infrastructure scalability.

Our client began its cloud migration to AWS with another vendor. However, due to this vendor’s lack of AWS experience, our client struggled with infrastructure setup issues, crossed planned deadlines, and thus had fallen far behind schedule.

AWS reached out SoftServe to step in to the project as an AWS ProServe to get the migration project back on track, validate the target AWS architecture provided by the previous vendor, and help with issues resolution. SoftServe determined that one of the major technical requirements for the AWS-based solution was mimicking the existing Hortonworks Data Platform based Teradata Hadoop Appliance setup in terms of security, data analysis, and data exploration tools. The cluster needed to be secured and auditable, support Kerberos/ActiveDirectory integration with SSO for end user interfaces, and support Hive/HDFS/HBase/Yarn authorization via Apache Ranger, as well as fine-grained authorization for EMRFS. End users such as data scientists, data analyst, developers, and power users had to be able to use toolsets like Spark, Hive on LLAP, HBase/Phoenix, Sqoop, Autosys, Atlas, and Ranger on Amazon EMR.

The data platform architecture, designed by the client, was based on a combination of customized Amazon EMR persistent and transient clusters with shared data storage on EMRFS, as shown on Figure 1. 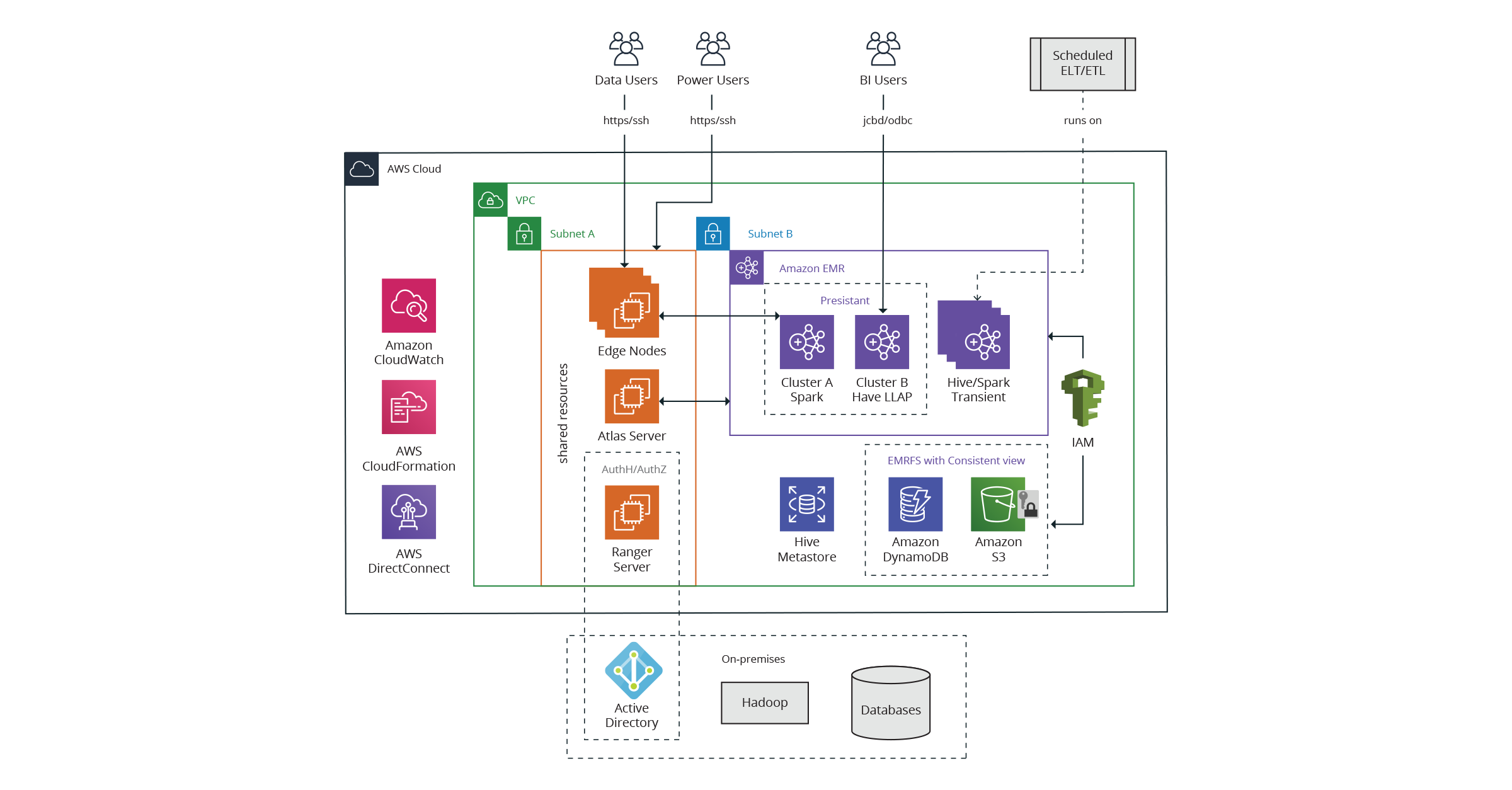 Our client faced deployment and configuration challenges while integrating Ranger, Hive on LLAP, Atlas, and edge nodes with Amazon EMR and on-prem security systems, including EMRFS authorization configuration. This kind of integration is not complicated, however it requires deep domain expertise in big data, cloud, and security. These integration challenges, in conjunction with strict timelines, would jeopardize project success, and thus our client made the decision to involve the AWS ProServ team.

The alternative scenario implied immediate TCO reduction in Phase 1 by migrating the Hortonworks Data Platform from on-prem to Amazon EC2 instances using the CloudBreak solution and leveraging existing in- house HDP skills and a sped-up configuration of Ambari-managed Hadoop services, while migrating data from HDFS to guarded S3 buckets. To achieve maximum TCO optimization (33-52%) with cloud-native services after Phase 2 it was recommended to migrate from Hadoop of EC2 instances to Amazon EMR and leverage Presto on Amazon EMR for interactive ad-hoc analytics instead of Hive on LLAP. 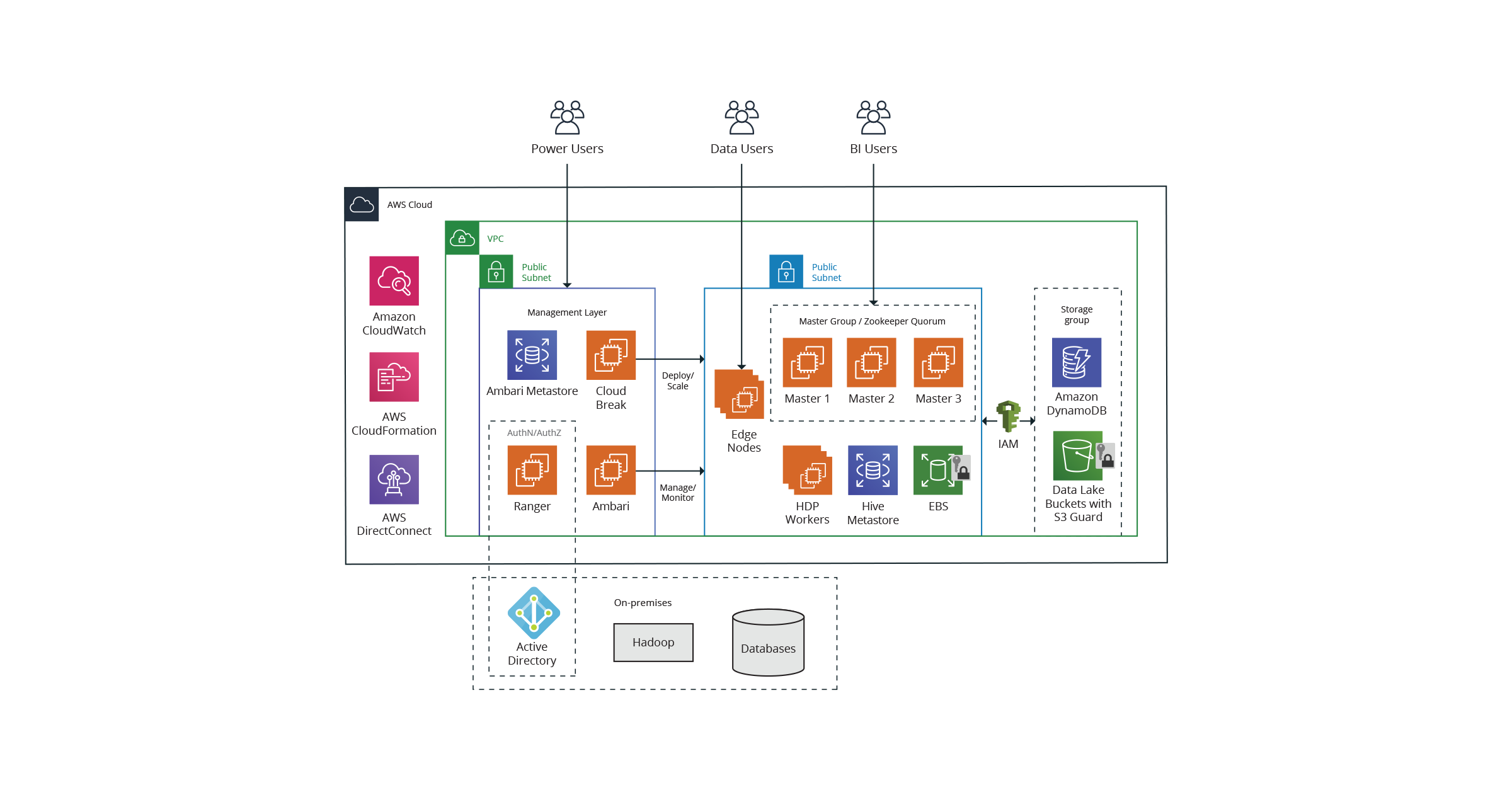 In order to meet deadlines associated with expiration of a Hortonworks support contract, the decision was made to go with Primary Scenario.

SoftServe brought the client’s migration project back on-track providing a bespoke Hadoop EMR cluster customized and secured according to the client’s requirements in a timely manner. Customer-specific performance requirements were met after fine-tuning of the Hadoop cluster.